Have you ever wondered what some scenes actually looked like without all the CGI? After all, we all know Harry Potter must look quite differently when filmed, but it’s another thing to see it. Have a look at these behind-the-scenes pictures at Hollywood, and laugh!

The Matrix completely revolutionized the special effects world when it came out in 1999. This is the famous scene where they dodge bullets in slow motion. No cable is actually involved, it’s all human strength and CGI.

20. Beauty And The Beast

Here’s another proof Emma Watson is an incredible actress. Dan Stevens looks so ridiculous in this padded suit with stilts… I would have laughed my head off the whole time. Emma Watson, though, didn’t crack a smile, not even once.

That’s a dragon? I expected something a bit more intimidating… Emilia Clarke certainly didn’t have an easy job. Can you imagine having emotions talking to a weird green stick?

At least they had Suraj Sharma acting and floating on water, right?

17. Harry Potter And The Order Of The Phoenix

I don’t know about you, but I don’t want to believe this photo is real. Magic is real, ok? I haven’t gotten my letter to Hogwarts because my letter got lost when Voldemort destroyed the Ministry of Magic’s records.

Twenty-something years ago, Michael Jordan and the Looney Tunes entertained kids and adults alike in Space Jam. This picture proves Jordan was actually underrated. Could you have done such a good job while having no acting background? I don’t think so.

Mad Max: Fury Road is easily going to be remembered as one of the best films of the decade, and its special effects are no stranger to this opinion. No deserts, no flips and explosions here, but great action scenes.

Bet you didn’t realize captain Davy Jones was 100% CGI in the movie! No prosthetics or wigs were involved, as you can see here. It’s all just computer!

OK, I knew there was a lot of CGI in Titanic, but this is too much to handle.

Mark Ruffalo has played Bruce Banner in The Avengers when he is human, but also when he is the Hulk. Although it must be hard to act in this suit, here I think the real merit goes to his co-actors, who had to see him look so ridiculous and still act as if he was impressive.

GoT needed green screens for two things at least: dragons and the wall. It looks like they weren’t climbing a 300 feet wall but “just” a 30 feet one. Still scary though!

10. Guardians Of The Galaxy

Actor Sean Gunn is the one in Rocket’s green morph suit, although it’s Bradley Cooper’s voice we hear when Rocket speaks!

9. Harry Potter And The Half-Blood Prince

Those Quidditch scenes were allegedly extremely uncomfortable to film for actors involved. 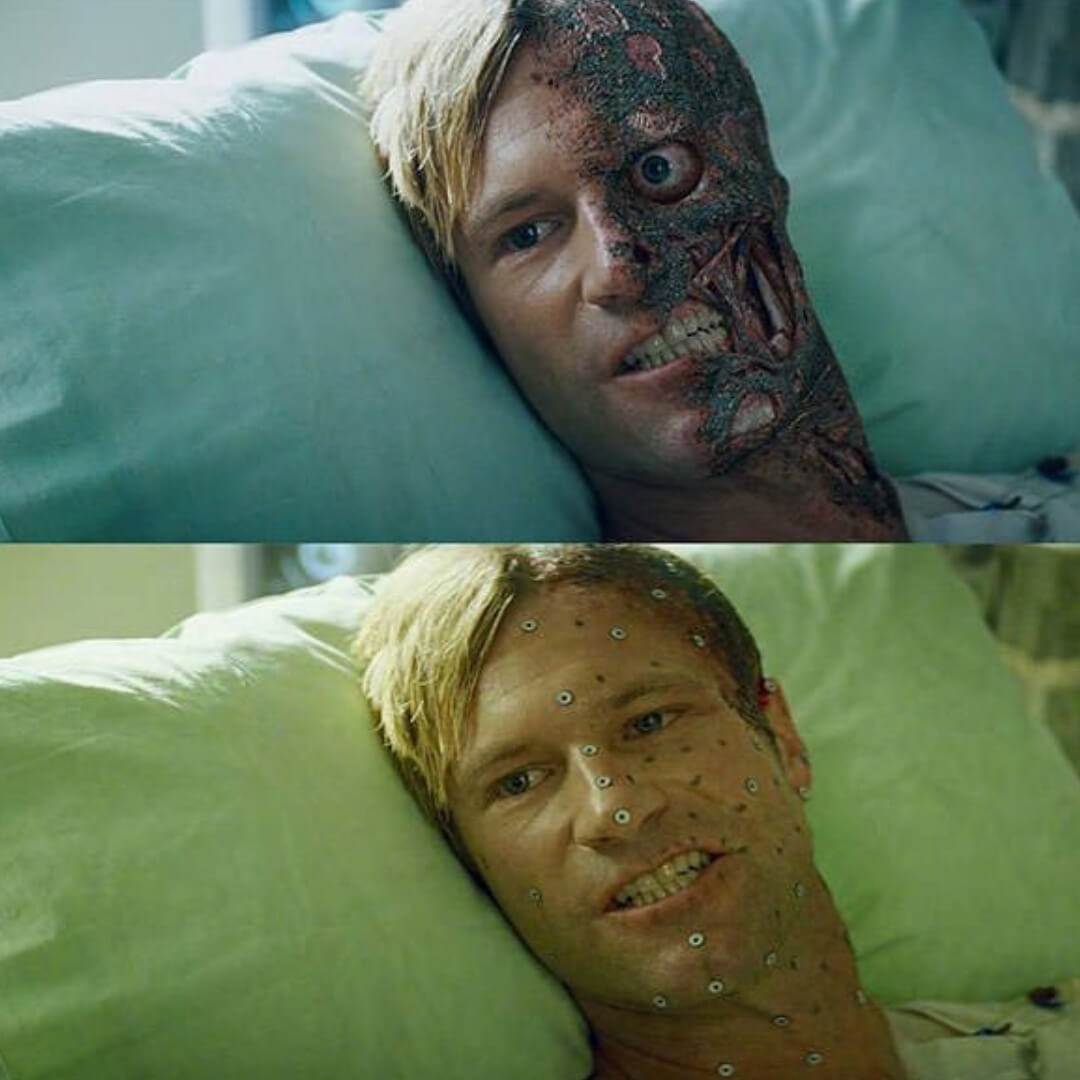 Aaron Eckhart did wonders when he played Harvey Dent. You can even see, without the CGI, how half of his face is more menacing than the other!

Any film based in space has to have CGI at some point, but this is a few steps beyond what we thought the set would actually look like. Sandra Bullock did a fantastic job in this role.

Yet another proof The Matrix was amazing. The scene was set in the subway, but they still chose to go for green screen backgrounds instead of filming the scene on location.

No, Uma Thurman couldn’t do all the stuff her character does in Kill Bill—that would be amazing! On the other hand, this is pretty cool too, am I right?

3. Rise of the Planet of the Apes

Sure, we would like to believe Ceasar is real, but that’s not the case. It’s still cool to see how they transformed actor Andy Serkis through CGI.

I don’t want to believe in a future where cops would be robots. That would be even scarier than now…

Yet another Marvel movie where actors looked ridiculous before CGI.